It was hard being one of four boys growing up in the 1940s in a dysfunctional family. Throw in alcoholic parents, a hot-tempered purebred American Indian mother, a father running secret missions for the military, and three wild brothers and you got a mix of family craziness.

This is a beautiful and engaging book about surviving and prospering after growing up in a dysfunctional family. It is told by a man who is a brother, husband, father, veteran, and an overall good guy who has a lot of life lessons to share with the world.

Author Sammy Lee Gott shares an emotional and raw telling of events tempered with insightful moments that shaped the way he sees the world today. This book is about his life journeys. From poor to financially well off. From emotional broken to loved and centered. From a feeling of self-doubt to one of self-worth. From a non-spiritual beginning to finding Christ. From not knowing what good parents are to raising independent and well-adjusted children that have a sense of what family is really about.

This book will make you think. It will also make you cry.

The book talks about all aspects of life – what it was like moving around so much, a lack of schooling (because they kept moving), early childhood years when the boys thought no one understood or loved them, relationships with women, finding Christ, relationships with their children, work, military service, and growing older.

Most books about dysfunctional families spend most of the pages defining what one is, not showing you the emotional scars. Most authors of books involving dysfunctional families write about resenting the world, they want to explain why they are the way they are, or they want to spread negativism in their book. Not this one. You see the growth, the hope, and the resolution. Sammy Lee Gott demonstrates his forgiveness and his ability to have moved on. 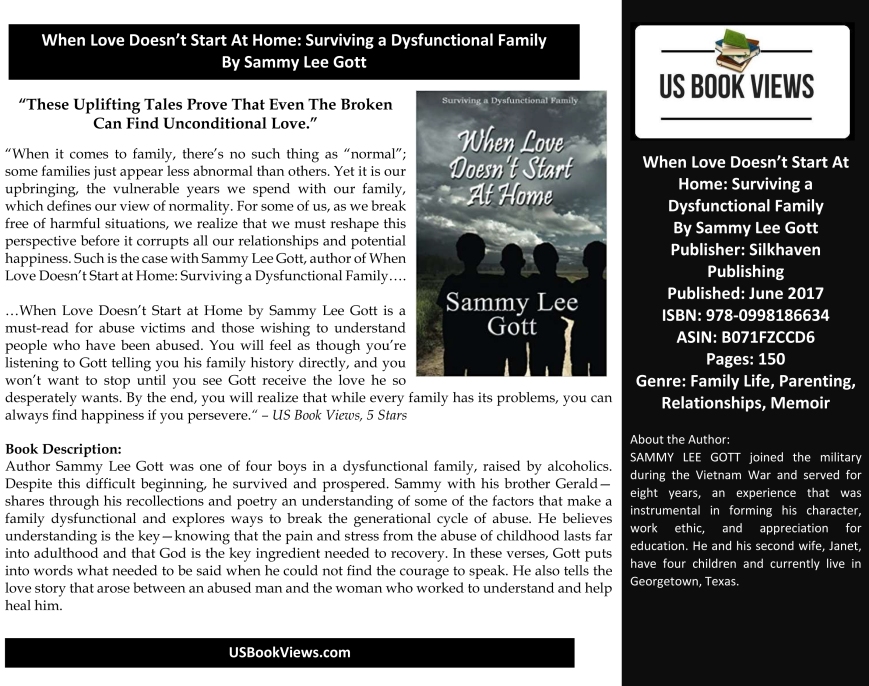 To purchase the book, please click on a retailer below.

Life is a Series of Jokes

Sammy Lee Gott has been a son, brother, husband, father, soldier, and all-around good guy for the last 75 years. During his life’s journey, he has learned the power of humor. This is a collection of his personal story and plenty of jokes he’s discovered.

Click on the retail site below to purchase “Life is a Series of Jokes” or to leave a review.

What readers are saying…

Finally! A book that talks about the ups and downs of living life FROM A MAN’s PERSPECTIVE! I love it. 🙂

Neither Man Nor Woman is Spelled S.A.I.N.T.

We are in the crossroad of hate and love between men and women in the United States, and, right now, hate is winning.  This book explores some of the ways that we as a nation can be more on the side of love—first by defining what love is, and second with suggestions on how men and women can make a difference in this battle.

This book speaks to the false information that is being decimated to the public through the media.  It addresses the damage that Radical Feminism and the Me-Too movement are causing between the sexes from a man’s point of view.  It reveals that not only is there a problem with Misogyny but also Misandry.  What are the causes of this intense hatred and why both are destroying the love that men and women should have for one another.

Click on the retail site below to purchase “Neither Man Nor Woman is Spelled S.A.I.N.T.” or to leave a review.

DRIVERS: The Demise of a Proud Profession

The call of the open road and the romantic notion of driving luxurious vehicles, meeting fascinating people, and traveling to exotic locations are lures that compel people to become DRIVERS.

Driving is a very old profession that started when the USA was very young. At that time drivers drove carriages and wagons behind horses. This was an age when your word meant something and good honest work gave you a chance to grow economically.

Professional career Drivers care about the well-being and safety of their passengers and ensure the rides they give are enjoyable experiences. But then, Corporations came into the picture. Big Business executives and stockholders had their own agenda.

That’s when the DRIVER got run over!

This proud driving profession is slowly disappearing. The demise of this livelihood for so many hard-working individuals is multi-faceted.

This book dives into the death of the vocation, the restricting government regulations, the diminishing pay, and how an entire industry has been lifted from the American economy.

Click on the retail site below to purchase “DRIVERS: The Demise of a Proud Profession” or to leave a review.